The participants joining the 62nd Annual Meeting of the PIAC on Sunday, August 18th, 2019, had to overcome some literal roadblocks as the road between the premises of Adventist University Friedensau, site of the Annual Meeting, and the nearest train station (Burg near Magdeburg) had been under maintenance, forcing drivers to make a substantial detour. Yet, this was not the only obstacle. Virtually out of nowhere, on Sunday afternoon, a torrential storm crossed the area, flooding the ground with rain and uprooting trees, one of which happened to block the road between the train station and the University campus. Some participants arrived very late in the evening, and thus the welcome reception was missed by a few participants.

On August 19th, Monday morning at 9 o’clock, the opening ceremony started in the Barn, indeed a former barn transformed into assembly hall, with a welcome address by Prof. Dr. Roland Fischer, President of Adventist University Friedensau. Secretary General Barbara Kellner-Heinkele gave an enlightening opening speech reflecting on the relationship between the main theme of this Annual Meeting, Religion and State in the Altaic World, and the historical importance of Sachsen-Anhalt and Magdeburg for Germany. A minute of silence was held for two old friends of the PIAC,

Hsiao Su-ying then paid tribute to

This year’s recipient of the PIAC Prize for Altaic Studies, was announced. The recipient, Prof. Dr. Martin Gimm, could not participate for health reasons. The laudator, Hartmut Walravens, elaborated on the multi-faceted and profound contributions of Martin Gimm to the field of Altaic Studies. A short welcome address by this year’s President, Oliver Corff, closed the opening ceremony and declared the 62nd Annual Meeting of the Permanent International Altaistic Conference officially opened. 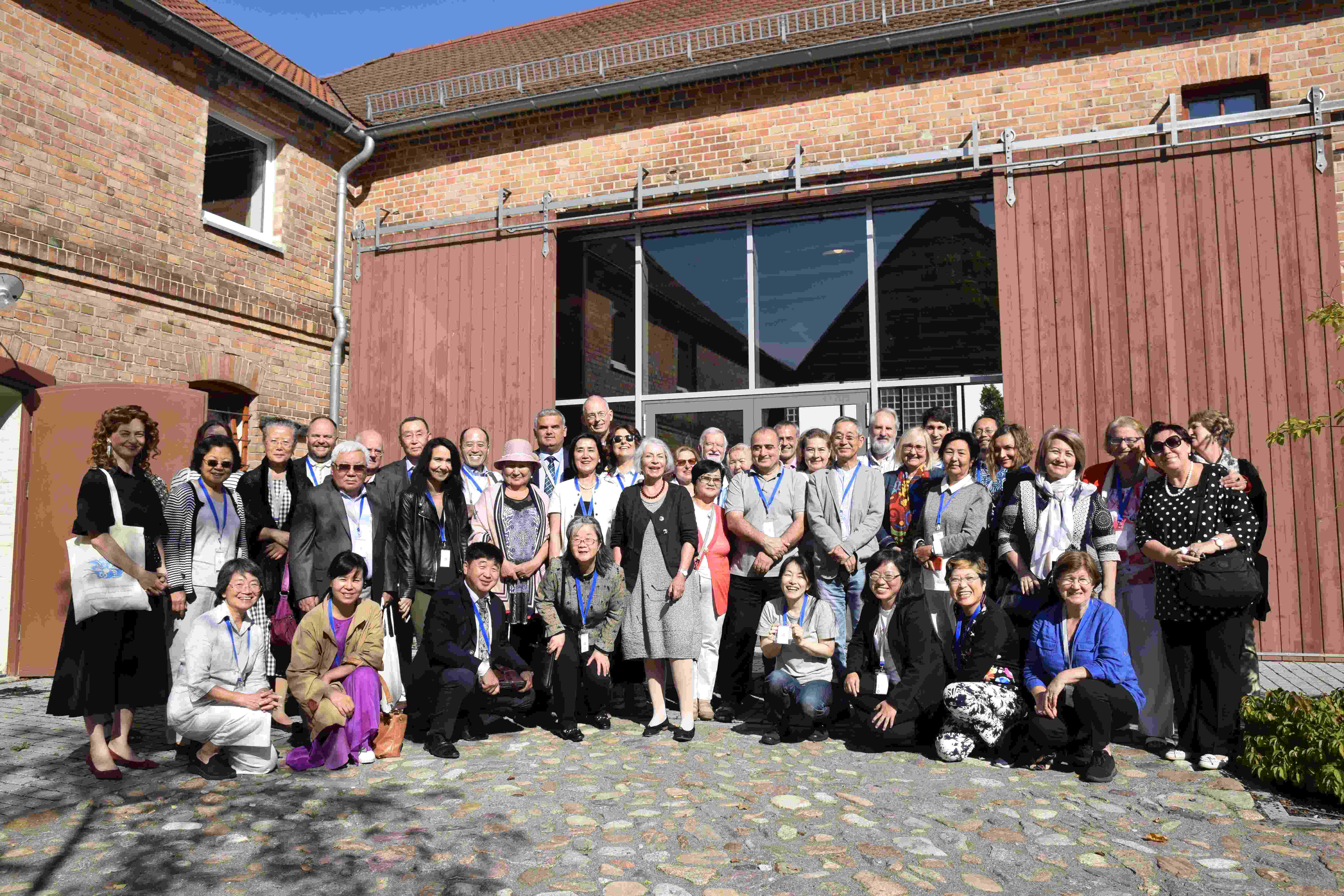 In original PIAC Annual Meeting tradition, the programme was not split into sessions, instead all lectures took place in the assembly hall, allowing all participants to share all presentations which were grouped in nine consecutive sections.

Nota bene: Most if not all presentation titles appear in an abbreviated form; follow the links for full title and text of abstract.

State, Philosophy and Society (chair: Barbara Kellner-Heinkele): Four papers were presented, on Qing dynasty records of disasters (O. Corff); family law among the Uyghurs (A. Mirsultan); the Quriltai and the Mobile Capital of the Qa’an in the Mongol Empire (Seol Paehwan), and Tree, Kut and State in Turkish Mythic Thought (F. A. Turan).

On the evening of the first day of academic deliberations, Prof. Dr. Roland Fischer, president of Friedensau Adventist University, personally gave a tour of the campus, explaining highlights of 120 years of history (the University was founded in 1899).

History, Literature and Faith (chair: Alicia Campi): A. Crowther reported on the cult of Bixia yuanjun; B. Kellner-Heinkele spoke about Moghul Tribal Tradition According to Mirza Haydar Dughlat’s Tarikh-i Rashidi, and Ruby Lam made remarks on the Sino-Oirad negotiation following the battle of 1449. J. Miyawaki-Okada spoke about Tibetan Buddhism and the governments of Mongolian nomads.

(Thursday, August 22th)
Tengrism, Shamanism and Related Belief (chair: Rodica Pop): This section offered discussions of modern as well as traditional aspects of ancient beliefs. G. Djamankulova spoke about totemism in the Altai; D. Funk reported about contemporary sacral practices in Southern Siberia; V. Kharitonova spoke about the revival of shamanism in contemporary Russia, while K. Maezono compared aspects of shamanism in the Secret History of the Mongols and the Kojiki, followed by N. Shaimerdinova with her report on tengrism in the life of Turkic peoples.

Religion and Society (chair: Junko Miyawaki-Okada): O. Dyakova reported on the phases of christianization of the Far East, I. Nevskaya and S. Tazhibaeva presented a recent survey on “Meskhetian” Turks, and A. Raimkulova investigated the role of mosques for the religious education of youth in Kyrgyzstan.

The Mongolian participants L. Bold and Ts. Batdorj came forward and announced the invitation of the Mongolian Academy of Sciences and the Institute of Language and Literature for the 63rd Annual Meeting in Mongolia, 2020. The invitation was met with applause by the plenum.

In reply to this resolution, Prof. Dr. Andreas Bochmann who stood in for Prof. Dr. Roland Fischer, President of Friedensau Adventist University, expressed that it was the University‘s privilege and honour to host this Annual Meeting; he was impressed by the number and diversity of presentations, concluding that it must have been a very intensive week of work, and offered his best wishes to all participants.

The general theme of this Annual Meeting, Religion and State in the Altaic World, set the continuo for the traditional excursion day. The participants visited the nearby city of Magdeburg and were given a guided tour of the Cathedral of Magdeburg as well as a tour of contemporary Magdeburg. After a river cruise the participants visited Burg. The local guides started the tour at a statue of Roland, depicted as a king with a drawn sword, signifying the town privileges of a medieval city. The tour ended with a presentation of the church of St. Petri, the Huguenot parish church of Burg, and its living religious tradition. Many participants had asked how institutions like Friedensau Adventist University, the Cathedral of Magdeburg or the parish of St. Petri had managed to survive in socialist times, and thus a short intervention on the history of the former German Democratic Republic and the relationship of church and government completed the historical sketch of this day. The excursion ended with a view from the city’s vineyard in the golden glow of the setting sun and a dinner under the open sky.

Impressions of the Meeting

A gallery of pictures showing scenes of the meeting as well as the excursion.