Hosted by the
Institute of Oriental Languages and Cultures, Faculty of Humanities,
Károli Gáspár University of the Reformed Church in Hungary

The 64th Annual Meeting of the Permanent International Altaistic Conference (PIAC) was held in Budapest, at very short notice. While the Covid-19 pandemic already had forced the hosts of the 63rd Meeting in Ulaanbaatar, Mongolia, to postpone the Meeting from 2020 to 2021, the pandemic situation continued to exert its negative influence to the effect that the Meeting could only be held in a virtual form for the majority of international participants. According to the original planning, the 64th Annual Meeting was to be held in Moscow this year, but military aggression, with all its consequences, made it impossible to convene a Meeting in Moscow. The Institute of Oriental Languages and Cultures, Faculty of Humanities, Károli Gáspár University of the Reformed Church in Hungary was willing to host the meeting, with Ákos Bertalan Apatóczky as President; he had already presided over the 60th Annual Meeting in Székesfehérvár in 2017. This Meeting would not have been possible without the energetic organizational skills of Cecília Hazai whose late father happens to be the eminent turkologist Prof. György Hazai (who was the President of the 12th Annual Meeting of the PIAC in 1969, held at Humboldt University in then East Berlin/GDR), as well as H.E. ambassador János Hóvári.

A minute of silence was held in remembrance of the many scholars, members and friends of the PIAC whose recent loss we have to mourn:

In a separate ceremony, now in the lecture hall which would host the Meeting for the rest of the week, this year’s PIAC Prize for Altaic Studies (informally known as PIAC Medal) was awarded to the eminent scholar Alice Sárközi in recognition of her outstanding contribution to the field of Mongolian studies. In the best possible combination of theory and practice, she is the author of many books as well as an important teacher several of whose students have become Mongolian scholars in their own right. Beginning in 1973, her frequent participation in PIAC Meetings spans nearly half a century.

After lunch, 27 participants from approx. 10 countries (a figure which cannot be stated more precisely than that due to the international background and occasional multiple affiliations of the participating scholars) introduced themselves to each other and shared their recent research activities. This section, called Confessions, is a time-honoured and important segment of all PIAC Meetings since the very beginnings. It allows all participants to get acquainted with each other and is an established means to further the understanding of the scholarly activities of the members, their institutions and their countries.

The presentations started on Monday afternoon with Opening Lectures. Barbara Kellner-Heinkele spoke about the formative years of the young V. V. Radlov, followed by Oliver Corff who spoke about transformational processes in two generations of Manju dictionaries.

All communications during the sessions of Tuesday and Thursday went exactly as outlined in the programme, which deserves mentioning as this is not always the case during PIAC Meetings. Hence, the following lines offer only a most rudimentary summary. All titles and references can be found in the aforementioned programme. On Tuesday, the first session on Linguistics was opened by Ekaterina Gruzdeva and Juha Janhunen, followed by Julie Lefort, Şükrü Halûk Akalın and Kao Hsiang-Tai. The second session, themed Scripts and Writing Systems, had presentations by Pierre Marsone, Michael Balk and Ákos Bertalan Apatóczky. A second secion on Linguistics featured presentations by Ayşe Şeyma Fındık, Elisabetta Ragagnin and Innokentiy Nikolaevich Novgorodov as well a joint presentation by Ilya Gruntov and Olga Mazo. The day ended with a session on Intellectual Heritage, with presentations by Hartmut Walravens, Alice Crowther and Guldana Togabayeva (three presentations in total).

The presentations on Thursday, August 25, 2022, began with a session on Material Culture (Christine Bell and Katharina Sabernig).

Judit Nagy, Vice-Dean for International Affairs, invited the participants to take a tour of the premises of the university which is located in the wonderfully restored architectural marvel of the Károlyi-Csekonics Palace.

During the traditional excursion, the participants were given a tour of the new Museum of Ethnography. In the afternoon, the Executive Director of the Representation Office of the Organization of Turkic States, H. E. Ambassador János Hóvári, invited the PIAC members to a reception at the Representation Office, located in the Ybl Villa, named after its architect Miklós Ybl, Hungary’s most influential architect and one of Europe’s leading architects in the second half of the 19th century. 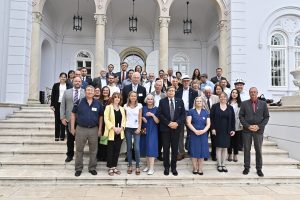 Official Group Picture during the reception at Ybl Villa on August 25th 2022, hosted by the Executive Director of the Representation Office of the Organization of Turkic States, Ambassador János Hóvári (center), 64th Annual Meeting of the PIAC, Budapest 2022. Image credit: Krasznai-Nehrebeczky Mária.

The members of this year’s Medal Committee were elected by secret ballot as follows (in alphabetical order): Juha Janhunen, Hartmut Walravens and Peter Zieme. The Medal Committee is completed by Secretary General and President, both ex officio.

With reference to her intention revealed in the opening remarks to step back as Secretary General, Barbara Kellner-Heinkele announced formally that she would not be available for this post anymore. By unanimous vote, Oliver Corff was elected as new Secretary General.

Judit Nagy, Vice-Dean for International Affairs, closed the Meeting formally with a short speech, taking the occasion to individually thank all contributors.

Impressions of the Meeting

A gallery of pictures showing scenes of the meeting.